In June 2006 Jane began her biggest fundraising event – a 4,200 mile ride across America.

It was a formidable challenge taking her from San Francisco to New York over 10 weeks, with barely 10 rest days and through some frighteningly harsh conditions.

Massive climbs up to altitudes of 13,000ft, sweltering desert temperatures of up to 110F, gale force winds and even swarms of migrating crickets were among the challenges along the way.

To compound the difficulties, Jane’s health was very, very frail and of great concern to all around her.

Days would begin with Jane barely able to function, but she would still find the courage to get on her bike and cycle for up 12 hours, digging deeper than ever before to continue in spite of her pain, illness and exhaustion.

Jane’s co-riders were Ryan Bowd, who had also completed the Florida Ironman with her, and cameraman Martyn Hollingworth, who had joined the Rome to Home ride in 2004.

Click here to watch the documentry Jane Tomlinson: Across the USA 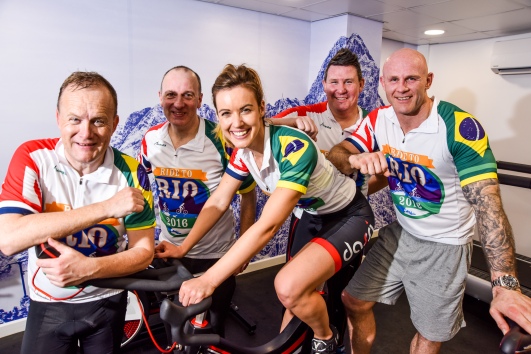 A decade ago, the late amateur athlete Jane Tomlinson CBE was about to embark on her biggest ever challenge, an exhausting 4,200 mile ride across America.

Inspired by her remarkable courage, this summer, Jane’s husband Mike will take on his own momentous challenge – by cycling over 3,000 miles from the UK to Brazil.

Mike Tomlinson will be joined in the epic adventure by a team of supporters including TV presenter Charlie Webster and ex-Rugby League professionals Keith Senior and Paul Highton as they journey from London’s Olympic Stadium to the Maracanã Stadium in Rio de Janeiro.

Setting off on Monday (June 27th) and cycling some 90 miles a day over six weeks, the team aim to arrive in time for the Rio Olympics Opening Ceremony on 4th August.

The challenge marks the 10th anniversary of Jane’s remarkable Ride Across America, which was to be her final challenge before her untimely death from cancer aged just 43.

Jane made headlines across the world by taking in a series of epic challenges from marathons to Ironman to cycling from Rome to Home. Her Ride Across America was to be her most ambitious challenge covering 4,200 miles over 10 weeks of cycling.

Throughout the journey, Jane’s health was deteriorating and whilst battling the heat she was also contending with a broken pelvis. Somehow she still found the courage to complete the distance.

Mike Tomlinson said: “On the 29th June 2006, Jane set off to cycle across the USA at a time when she knew her cancer was aggressive and in its final stage. Her success was testament to her incredible mental strength.

“The Appeal, and we as a family, wanted to mark this milestone in a special way. As Jane was an ambassador for the 2012 London Olympics bid, it seemed appropriate to celebrate her life by cycling to Rio.

“Hopefully, the challenge will help us raise some money, but we also hope that by reminding people about Jane’s journey, it will inspire other people – and show just what can be possible with courage and determination.”

The team – joined by supporters at sections along the way – will pedal from London’s Olympic Stadium to Portsmouth. After landing in Caen in France, they will then take on 1,123 miles of testing terrain to Lisbon.

From Lisbon, the team flies to Recife in the north east of Brazil before venturing along the 1,600 mile coast road to Rio de Janeiro.

Charlie Webster said: “Jane showed complete determination and courage throughout her diagnosis and if I can have an ounce of that courage then I know I’ll be fine.

“It’s going to be a long, hot journey, but as a sports fan, the thought of cycling into Rio gives me goose bumps and doing it for such an amazing cause makes it even more special.”

The challenge aims to raise thousands of pounds for the Appeal to carry on Jane’s legacy, supporting children’s and cancer services across the country.

The money Jane raised on her Ride Across America helped to fund the launch of the Leeds 10K – part of her lasting fundraising legacy – which has brought in more than £4m for charities since her death.

The team will be away for the 2016 Leeds 10K on Sunday 10th July, but will run their own 10K on what should be a rest day in Portugal to ensure they are ‘there in spirit’.

A share of the money raised from the Rio Challenge will also go to support Rugby League Cares, a dedicated charity supporting the Rugby League family and its local communities.

Paul Highton, who plans to pedal the full 3,000 miles, said: “Jane Tomlinson was an inspiration to all of us who care about both life and sport and I feel privileged to be able to help build on her fantastic legacy on the Ride to Rio with Mike, Keith and Charlie.

“From a personal point of view I’m looking forward to helping Rugby League Cares, a charity which does so much good for players and everyone else involved in the sport. It’s good to be able to put something back into a game that means so much to so many people.”

Keith, who will join the team for the entire Brazilian leg, said: “I’ve done a lot of challenges since I retired as a player because like all sportsmen I’m always looking to test myself and this one is the biggest test of all.

“It’s great to have this opportunity to raise fund for the Jane Tomlinson Appeal, Rugby League Cares and the Sheffield Eagles Include Foundation, of which I’m a trustee.  Rugby League Cares does a lot of good work to help players succeed in their life after sport and I’m delighted to be doing the Rio Challenge on their behalf.”